Albuquerque, NM (November 26, 2022) - One person lost their life in a fatal pedestrian crash at an intersection in Albuquerque. Just before 9:00 p.m., emergency crews were sent to the scene on Central Avenue.

The fatal incident happened at the intersection of Central Avenue and Valencia Drive in the Fair West neighborhood. Police and first responders arrived at the scene at around 8:54 p.m.

At this time, few details have been reported concerning the accident. Police stated a male pedestrian was headed south on Valencia attempting to cross at Central Avenue when he was struck by a westbound vehicle.

The victim was rushed to a local hospital where he later lost his life. The investigation into the details of the accident remains ongoing at this time.

We would like to offer our sincere condolences to the family of the deceased vicitm. 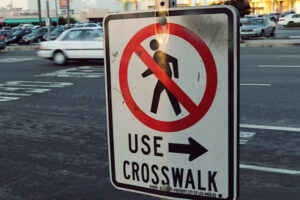 Pedestrians are more likely to be fatally injured in auto accidents. This is due to the fact that they travel totally unprotected against the strong force of large vehicles. When pedestrians are involved in accidents, they often sustain injuries that are debilitating or even fatal. Broken bones, brain injuries, and spinal cord injuries are extremely common among pedestrians involved in traffic accidents.

Serious car wrecks happen most often due to the actions of distracted, intoxicated, speeding, or over-tired drivers. Drivers who are not paying close attention to the road and their immediate surroundings are more likely to end up hitting a pedestrian who is attempting to cross the road, or who is walking along the sidewalk. When you lose a loved one in a pedestrian crash caused by a negligent driver, it is necessary to take legal action so you can recover compensation.

You can collect financial compensation for the costs related to funeral care, burial costs, medical care costs, lost wages, pain, suffering, loss of life enjoyment, loss of consortium, and more. Many different damages, both economic and non-economic, may result from losing a loved one in a car wreck caused by a negligent driver. Not only do you deserve to be compensated for your loss, but the negligent party needs to be held accountable for their actions so they are less likely to hurt another person in the future, and so you get the justice you deserve.

Contact Will Ferguson & Associates as soon as you can after you lose someone you love in an accident. We know that this is a difficult time in your life, but we are here to help you in any way we can. Collecting financial compensation could help you be able to focus more on your emotional recovery and that of your family.

Call our team of wrongful death lawyers in Albuquerque at Will Ferguson & Associates at  (505) 243-5566 as soon as you can to learn more about your legal rights.