Albuquerque, NM (December 19, 2021) - A pedestrian was killed following a hit-and-run accident in the Albuquerque area on Sunday morning, December 19. The deadly crash was reported at the intersection of Coal Avenue and Tulane Drive at around 10:21 a.m.

A pedestrian was crossing the intersection when they were struck by an oncoming motor vehicle. The driver fled the scene without rendering aid to the injured party. The crash victim was later pronounced dead by responding medical personnel.

Local authorities later found the at-fault driver, and he was arrested for driving under the influence and other charges. The identity of the deceased party has not been released at this time.

An ongoing accident investigation is being managed by local law enforcement officials. 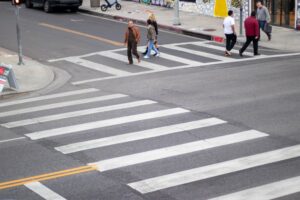 Pedestrians are more susceptible to road hazards, which increases their risk of serious injury in car accidents. In New Mexico, pedestrians and motorists frequently cross paths on the road. Since 2016, the state has had the country's highest rate of pedestrian deaths. Pedestrian fatalities are on the rise in the United States, with pedestrians 1.5 times more likely than passengers in passenger cars to die in a car accident.

A pedestrian is vulnerable to the full force of a serious collision. As a result, pedestrians are frequently involved in traffic accidents that result in serious or fatal injuries. In the event of a collision, pedestrians are vulnerable to life-altering injuries and other damages, such as medical expenses, lost wages, pain and suffering, and other losses. These collisions have resulted in life-altering and even fatal injuries in the past. Injured parties can sometimes recover lost compensation and hold the party responsible for the crash responsible for the resulting damages with the help of a qualified Albuquerque car accident lawyer. This may be the only way to get the full value of their claim in some cases.

Following an accident, the legal team at Will Ferguson & Associates is here to help you protect your rights. After being injured in a pedestrian accident caused by a negligent driver, we have years of experience assisting clients in pursuing successful personal injury claims. We'll look into your accident, put together a strong case, and file a claim for lost wages to make sure the driver who caused your injuries is held accountable. Our Albuquerque wrongful death lawyers will not rest until the responsible party is brought to justice. Don't let a large insurance company take advantage of you after a pedestrian accident.