The Causes of Pedestrian Accidents in New Mexico

For the sixth year in a row, New Mexico has held the unpleasant distinction of being the deadliest state for pedestrians.

In 2021, the Governors Highway Safety Association listed New Mexico as the state with the greatest per capita rate of pedestrian deaths. Since 2016, when the state's mortality rate was 3.45 per 100,000 residents, it has topped the GHSA's last year.

In New Mexico, 103 pedestrians were killed in traffic accidents in 2012, the highest number ever recorded for the state. Tragically, the Albuquerque metropolitan region also had a record number of 49 deadly pedestrian accidents.

In a press release, the GHSA described the most recent total as heartbreaking and intolerable.

Officials added that state authorities and drivers must address the underlying causes of the pedestrian safety issue in New Mexico—speeding and other risky driving habits, poor infrastructure, and roads intended for car speed rather than safety—to reverse this trend and assure pedestrian safety.

The GHSA is currently examining data for 2021; however, research indicated that in 2020, 17% of all traffic fatalities included pedestrians, and the proportion of those involving speeding increased by 8.6%.

Given the technological advancements that have led to more visible street crossings and car sensors that detect obstacles, it may be surprising that pedestrian fatalities are on the rise. However, for each advance in safety we make, we often take two steps back. Among the causes that contribute to the rise in deaths are the following:

Tragically, as pedestrian death rates have reached their highest level in 28 years, injury rates have also grown. In 2016, the Centers for Disease Control and Prevention (CDC) reported that almost 130,000 pedestrians were treated in emergency rooms for injuries resulting from collisions.

When Do Pedestrian Accidents Usually Occur? 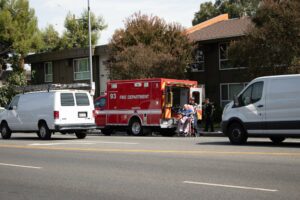 The 2015 Community Report from the New Mexico Department of Transportation reveals an unusual five-year trend relating to accidents and seasons. Specifically, December is the month with the greatest number of accidents from 2011 to 2015.

There may be a number of factors at play here, including increased holiday traffic and chilly weather. Meanwhile, per the National Highway Traffic Safety Administration, intersections are not the most frequent site of fatal pedestrian accidents; just 18% of deaths occur there (NHTSA). Additional NHTSA data includes:

Other Causes of Pedestrian Accidents in New Mexico

Given the prevalence of DUI-related crashes in New Mexico, one might be forgiven for concluding that drunk driving is the state's leading cause of pedestrian accidents. Instead, driving inattention or distraction is the most common cause of accidents involving pedestrians.

Generally, walking is considered a harmless pastime, yet, in rare instances, merely strolling down the street might put your life in danger. There are careless and negligent drivers on the road, and if you've been injured by one, you have many alternatives for recovering your losses. Accidents involving pedestrians often result in severe injuries, including pain and suffering, mobility difficulties, scars, and mental stress.

Thankfully, you are entitled to compensation when a reckless motorist causes such a life-altering incident. Filing a personal injury claim is the best method to achieve justice and monetary recompense after a pedestrian accident. Contact an Albuquerque pedestrian accident lawyer at Will Ferguson & Associates to initiate your claim immediately.

If we determine that you and your family are eligible for compensation, we will handle every aspect of your legal claim and provide you with seasoned legal counsel from a reputable Albuquerque automobile accident attorney team. When you meet with our team for your first free consultation, we will determine the best next steps for you and yours based on your potential claim and case details.

Please get in touch with us as soon as possible. Throughout every step of the claim process, our team will work diligently and thoroughly to ensure that justice is served. Your accident has likely altered the course of your life, and you deserve justice for that; retain an Albuquerque pedestrian accident attorney to ensure you get it.